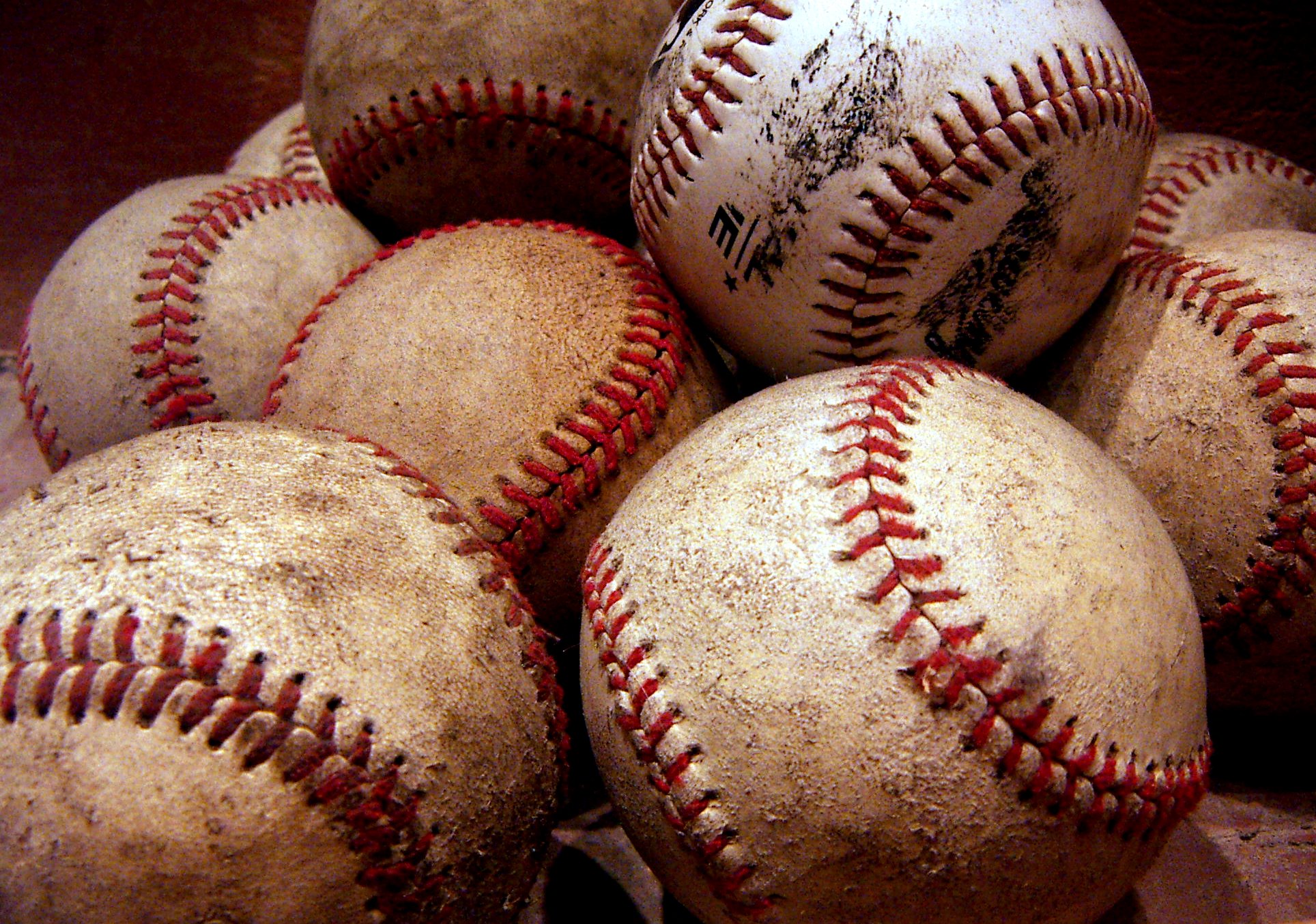 For years, I have played around with “Take Me Out to the Ball Game” in my mind, listening to the rhythms, the melody, and the feeling of free abandon. “I don’t care if I never get back,” goes one of the pivotal lines. Give me peanuts, crackerjacks, and a ballgame, that’s all I need. But how does the song give us that feeling of freedom and escape? (The song as we know it is the chorus; there are also two verses that can be heard on Youtube recordings.)

Here are rhythms of the chorus along with a 1908 recording by Edward Meeker (listen): 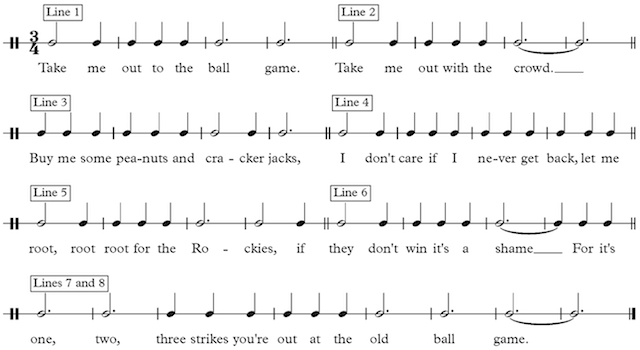 Lines 1 and 2 are balanced and independent with longer note durations at the beginning and end. Line 3 builds energy with a series of quarter notes in the beginning; think “Buy-me-some pea-nuts-and cracker jacks.” The rhythmic energy of line 4 then spills over into the beginning of the next line; notice the continuous quarter notes with “I don’t care-if-I never-get back-let-me root …” These are the rhythms of escape! Line 4 is the only one that has continuous quarters in the second, third, and fourth bars, leading directly into the next line.

What about the melody? It is almost entirely bound by an octave, the span from do to do in solfege or from one C to the next. But there is one line that escapes the octave. Which one? You guessed it, line 4 (listen):

What did I hear you say? Ah yes, that’s right, the melody does get back to the beginning on “Root, root, root for the home team.” Oh well, life continues until the next game or the next season. But wait, there is one more cool thing about the song. The last two lines are unique; they are hitched together by verbal syntax, melody, and rhythm: “One, two, three strikes you’re out / at the old ball game!” In this case continuous quarter notes fuse lines seven and eight into the classic, rousing conclusion.

In Lieu of Footnotes

“Take Me Out to the Ball Game” was composed in 1908 with words by Jack Norworth and music by Albert von Tilzer. The song has been making its rounds in CU theory circles: Michael Buchler presented it in a colloquium last year as an example of a structural line that rises through the upper tetrachord and I presented it in my second semester theory course to illustrate secondary dominants. I explore the rhythms of poetry and song more broadly my book Songs in Motion: Rhythm and Meter in the German Lied (Oxford University Press 2010). As I write this blog entry, the Colorado Rockies are 20 and 27, in easy striking distance of the Padres and Diamondbacks.

CU ALUMNI IN MUSIC THEORY: WHERE ARE THEY NOW?

The MM in Music Theory degree was inaugurated in 2006. Many of our recent MM theory graduate students have continued their studies and have been accepted into prestigious PhD programs (Eastman School of Music, Florida State University, McGill University, University of Oregon). Some have already accepted university positions following their studies.

Other CU graduates have gone on to develop impressive careers in Music Theory, publishing books and articles, and garnering awards in teaching and research.

For all of us on the Music Theory faculty, one of the most rewarding aspects of teaching at CU Boulder is working with students of remarkably high caliber. The size of the Music Theory Program is kept deliberately small, in order to provide close professional mentoring.

Here is what our MM Theory graduates and other CU grads now in Music Theory are up to:

Matthew Arndt (MM Composition, 2001) is Assistant Professor of Music Theory at the University of Iowa School of Music. He earned a Ph.D. in Music at the University of Wisconsin­Madison. He has published articles (on the Musical Theories of Arnold Schoenberg and Heinrich Schenker) in the journals Theoria, Theory and Practice, the Journal of Schenkerian Studies, and the Journal of Music Theory. He currently has a book in progress entitled “With God!”: The Musical Thought of Heinrich Schenker and Arnold Schoenberg.

Rachel Chacko (PhD Music Theory, 2010) is currently Assistant Professor of Music at Whitman College in Walla Walla, Washington. Her research (on the Transcultural Music of U.S. Composer Lou Harrison) is published in the Journal of the Society for American Music andAmerican Music (forthcoming).

Sarah Reichardt Ellis (BA Music, BA Mathematics 1994) is currently Associate Professor in Music Theory at the University of Oklahoma where she also serves as the Assistant Director for Undergraduate Curriculum and Advising. She has presented lectures across the United States and throughout Europe, and her book, Composing the Modern Subject: Four String Quartets by Dmitri Shostakovich, was published by Ashgate in 2008. In 2012 she was named the Associates Second Century Presidential Professor at the University of Oklahoma for her accomplishments in teaching and research.

Landon Morrison (MM Theory, 2012) is currently in his second year of the Ph.D. program in music theory at McGill University in Montreal, Quebec, where he is a teaching assistant for undergraduate music theory courses and a research assistant for Dr. Robert Hasegawa’s project on French Spectralism. His review of Brian Kane’s new book, Sound Unseen, was just published in Music Theory Online, and he will be presenting a paper (on Metrical Entanglements in the Music of Radiohead) at the International Association for the Study of Popular Music conference this summer in Brazil.

Mitchell Ohriner (BM Composition, 2004) in 2012 won the prestigious Emerging Scholar Award from the Society for Music Theory for an article (on Expressive Timing in Performances of Chopin’s Mazurkas) published in Music Theory Online. While at CU Boulder he studied composition with Richard Toensing and Michael Theodore and took advanced theory courses with Steven Bruns, Daphne Leong, and Keith Waters. He received his Ph.D. in music theory from Indiana University in 2011 and is in his fourth year as an Assistant Professor of Music Theory at Shenandoah University in Winchester, VA.

John Peterson (MM Theory 2011) is now Assistant Professor of Music Theory at James Madison University, where he began working in 2014, the same year he completed his Ph.D. in Music Theory from Florida State University. John entered FSU with a Legacy Fellowship: he was one of only fifteen University-wide entering students with this distinction. During his time at FSU he was nominated for a teaching award, and he has presented his research (on Musical Agency) at multiple conferences, including the annual national meeting of the Society for Music Theory.

Alan Reese (MM Theory, 2013) is currently in his second year of the Ph.D. in Music Theory program at the Eastman School of Music. As part of his Teaching Assistantship there, he is instructor of record for Sophomore Music Theory. He maintains ties to CU by assisting his former advisor Keith Waters on the online History of Jazz class (Summer Session). In 2014 he presented work from his CU Master’s Thesis (on Functions and Treatments of the Augmented Sixth Chord in the Music of Debussy and Ravel) at the conference of the Music Theory Society of New York State.

Joelle Welling (BM, 1992) is Chair of Music at the University of Calgary’s School of Creative and Performing Arts.  She completed degrees in Music Theory at the University of Wisconsin (MM) and the University of Texas at Austin (Ph.D.).  Joelle has twice received a U of Calgary Teaching Excellence Award and has presented papers at conferences throughout Canada and the United States on topics such as analysis/performance relations, text-music relations, late 19th/early 20th-century song, and music theory pedagogy.  A former Associate Dean (Students) for the Faculty of Arts, Joelle is currently the President of the Canadian University Music Society.

Our most recent graduate, Chelsea Wright (MM Theory, 2015) will enter the Ph.D. program in music theory at the University of Oregon. She was awarded a 4-year Graduate Teaching Fellowship, and the first course she’ll lead is sophomore theory, an advanced initial assignment indeed. Congratulations, Chelsea!