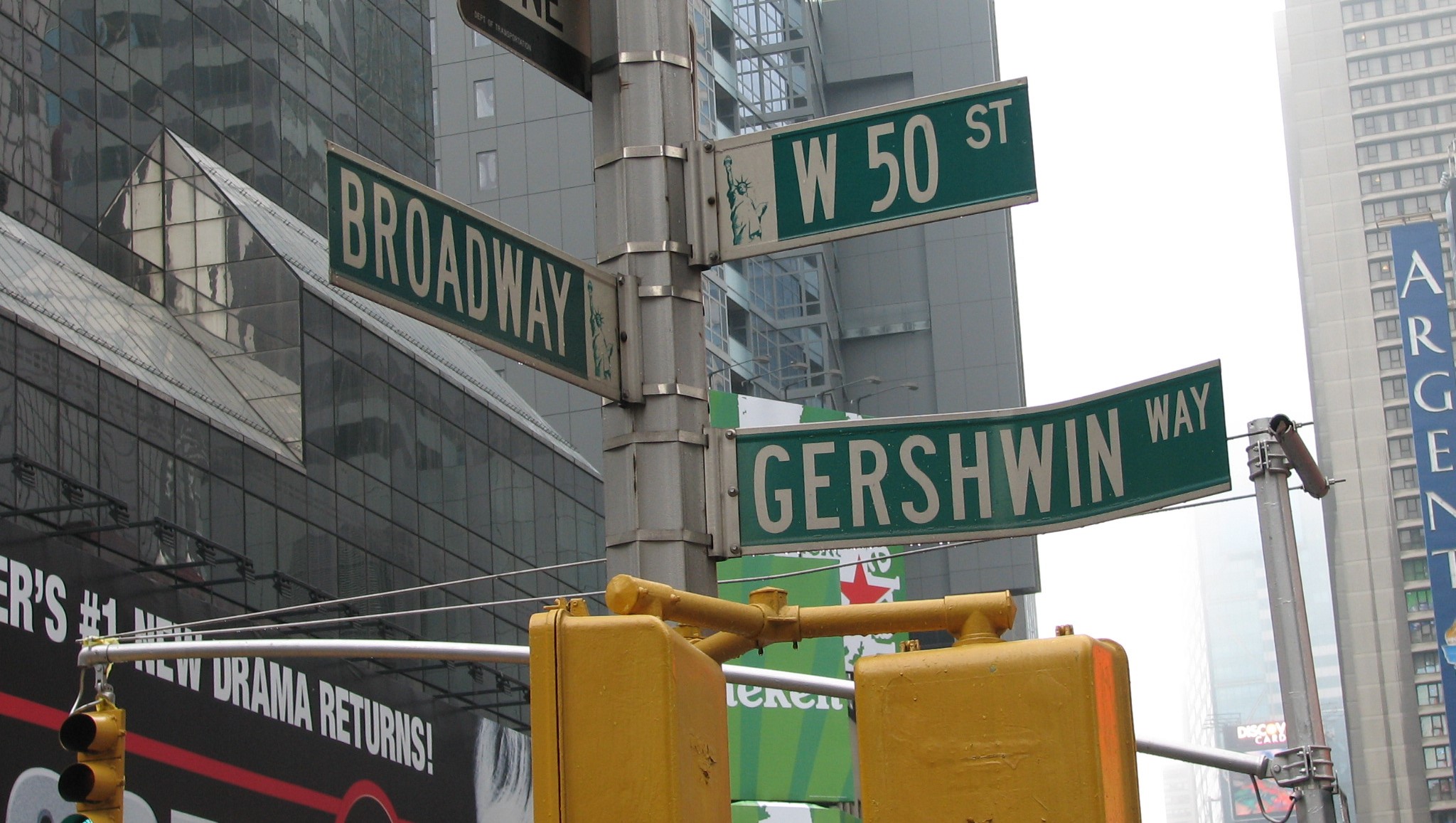 Listen to “I Got Rhythm.”

When George Gershwin wrote the music to “I Got Rhythm” for the 1930 musical Girl Crazy, he likely had no idea that it would become one of the most famously enduring songs of American popular music. Nor would his brother Ira, who wrote the lyrics. Ira took a few risks by abandoning the usual technique of rhyming the ends of consecutive lines or couplets. The only rhymes occur either at the ends of larger segments of the AABA song (shown in red: “anything more?” rhymes only with “round my door”) or within two interior lines of the B section (shown in purple: “I don’t mind him,” “you won’t find him”).

Lyrics for “I Got Rhythm”

A1 Section
I got rhythm,
I got music,
I got my man,
Who could ask for anything more?

A2 Section
I got daisies,
In green pastures,
I got my man,
Who could ask for anything more?

B Section
Old man trouble,
I don’t mind him,
You won’t find him,
‘round my door.

Without regularly recurring rhymes at the ends of lines, “I Got Rhythm” instead makes use of a kind of musical rhyme. It is, perhaps unsurprisingly, based upon rhythm—the entire song is dominated by a single rhythm. The four-note rhythm appears in three of the four lines of the A section in an upward (“I got rhythm”), downward (“I got music”), then upward (“I got my man”) motion. The same rhythm appears again in all four lines of the B section, which again alternate upward and downward motion, but now in a different fashion (“Old man trouble,” “I don’t mind him,” “I can’t find him,” “round my door”). The rhythm is jaunty and syncopated, and is an ongoing link for virtually the entire song (the only exception is the ending line of the A sections: “who could ask for anything more”). In a sense, this rhythm gives the song its DNA.

But in another sense, that rhythm had already been part of the DNA of American popular music for decades before Gershwin wrote “I Got Rhythm.” Emerging from Afro-Cuban sources, the rhythm was then absorbed into ragtime as it was developing in the Midwest in the 1890s, and into early jazz in New Orleans in the first decades of the twentieth century. You can hear a version of that rhythm in the accented parts of the right hand near the opening of Scott Joplin’s 1899 ragtime classic “Maple Leaf Rag.” (Listen here.) Thus “I Got Rhythm” not only rhymes with itself through the use of that rhythm, it resonates deeply with an already ongoing tradition of American popular music. What better way to convey a love song whose topic is itself rhythm? Could we ask for anything more?

Keith Waters and Yonatan Malin will present “Gershwin Meets Schubert: Words, Music, and Song,” with performances by CU Boulder students, on Sat., Oct. 24. For more information, see Upcoming Events (below). “Gershwin Meets Schubert” is the first of the Musical Conversations series, a new venture of the Music Theory Department in collaboration with CU on the Weekend. We aim to share our understanding of musical structure and meaning in accessible and engaging formats.

In this issue we highlight the research and creative work of our music theory faculty.

Keith Waters’ article, “Chick Corea and Postbop Harmony,” will appear in the upcoming edition of Music Theory Spectrum, the flagship journal of the Society for Music Theory. Oxford University Press will be publishing his fifth book, Postbop Jazz: The Compositions of Wayne Shorter, Herbie Hancock, and Chick Corea, in late 2016 or early 2017. 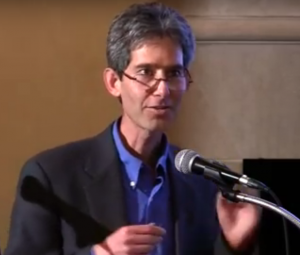 Yonatan Malin continues to develop analytical work in both German Lieder and Jewish liturgical music. He gave a presentation on Jewish cantillation (Biblical chant) at Magnified and Sanctified: An International Academic Conference on the Music of Jewish Prayer in Leeds during the summer, and he has an article forthcoming in Yuval Online, a publication of the Jewish Music Research Center at The Hebrew University of Jerusalem. The article shows how the six musical modes of Jewish cantillation relate to liturgical occasions and Biblical texts. Another work in progress focuses on poetic syntax and musical flow in songs by Fanny Hensel née Mendelssohn. Hensel often modulates to new keys from the get go, and these early modulations reflect poetic syntax and meaning in fascinating ways. Malin presented this work at a conference at the University of Victoria in February and he is currently revising it for publication.

Steven Bruns spent his recent sabbatical year writing a book on composer George Crumb. In January, he lectured on Crumb at Case Western Reserve University. Later in the spring, he was involved in Crumb concerts  at Swarthmore College, the Curtis Institute of Music, and Alice Tully Hall at Lincoln Center. On October 20, he will participate in a panel discussion with NPR’s John Schaefer and the Kronos Quartet, following their performance of Crumb’s Black Angels in New York.

Kris Shaffer is using computational tools to investigate the relationship between the sound of German poems and the structure of the music to which composers set those poems. This is a collaborative project with researchers Stephen Rodgers (U. of Oregon) and Leigh VanHandel (Michigan State), CU alumnus David Lonowski, and CU undergraduate Jordan Pyle. Kris’s main contribution to this project is the writing of computer code that will use statistics to find potentially interesting passages quickly in a very large set of songs, as well as to find which musical structures most closely relate to the sonic patterns in the poetry. You can read more about the project at http://liederproject.shaffermusic.com. Kris is also presenting on public scholarship and the digital humanities at UT–Austin on October 22–23.

Philip Chang continues to explore the compositional treatment of the E mode in French viol and harpsichord music in the late 17th century. The mode behaves rather tonally (like E minor) in dance movements, but more archaically in improvisatory works such as preludes. E mode pieces are rare: the only known harpsichord piece in the mode is a prelude by Louis Couperin, and three known viol pieces were composed by Ste. Colombe fils. Dr. Chang is also writing an article about the music in the H.P. Lovecraft short story “The Music of Erich Zann.”

Daphne Leong published on “Time’s ‘Suchness’ in Robert Morris’s Clear Sounds” in Perspectives of New Music, and on “Folk Rhythm at the Center of Bartók’s Fifth String Quartet” in The String Quartets of Béla Bartók, ed. Biró and Krebs (Oxford University Press). Her review “On Experience and Meaning in Music Performance” is due out shortly from the Journal of Music Theory; another essay “Analysis and Performance, or, wissen, können, kennen“ is forthcoming from Music Theory Online. Her book project Performing Knowledge: Performance and Analysis in Music of the 20th Century, which features chapters collaboratively authored with performing artists, is under review. In 2015 Leong also gave the world premiere of Richard Toensing’s For Daphne. Her quartet Throw Down or Shut Up!  gave concerts at the Dazzle Jazz Club, Denver and at the Dairy Center Soundscape Series, Boulder. On October 13 Throw Down presented an interactive new-music concert, including the world premiere of a work by Hunter Ewen, on the Faculty Tuesday series at CU Boulder.

Why is the combination of words and music—song—such a powerful medium?  Over centuries and across cultures songs address love, sadness, elation, loss, ideology, history, and national pastimes. Our discussion and performances look at two specific genres, the American Popular Songbook and German Lied, and point out some features of songs that make them enduring. This 90-minute interactive presentation includes performances of songs by George Gershwin, Franz Schubert, Albert von Tilzer, and Irving Berlin.