What is unique about the major scale?

The scales that composers use are a bit like alphabets: they constrain possible words and even (to some degree) syntax. 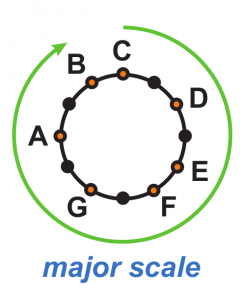 These two attributes of the major scale are special characteristics; they do not both hold for any other collection within the 12-note chromatic universe.2 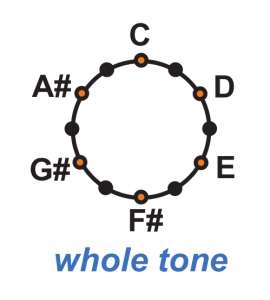 Contrast the interval class vector of the major scale, [254361], with that of the whole tone scale. The whole-tone scale’s intervallic fingerprint is [060603]: it has zero of all the odd intervals (1, 3, 5), and six or three of each of the even intervals (2, 4, 6). As you can see from the circular representation, it is completely symmetric. 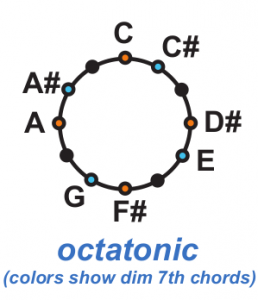 The octatonic scale is another symmetric collection. Its interval class vector is [448444]. As the vector shows, its dominating interval is 3 (the minor 3rd)—there are eight 3s. Some jazz musicians call this the “diminished” scale because it can be constructed from two “fully diminished 7th chords,” that is, from two cycles of 3s.

The major scale, as we all know, is the basis for much classical music such as that by Mozart, Beethoven, and Brahms. In various other orderings (modes) it was also important for earlier music. The whole tone and octatonic scales frequently occur in music by composers of the twentieth century, such as Debussy, Bartók, or Stravinsky.

Here’s the major scale collection at work in the second movement of Mozart’s Piano Concerto, K. 467:

Here’s a passage from Debussy’s Iberia that uses the whole-tone scale:

And finally, a passage from Bartók’s Free Variations built on the octatonic scale:

The collections for the major, whole tone, and octatonic collections are all maximally even (distributed as evenly as possible among the 12 chromatic notes), but the deep scale property characterizes the major scale while transpositional and inversional symmetry characterize the other two.

The major scale has the same structure as a common West African rhythmic pattern.

Daphne Leong will present “What do you hear? Listening to modernist music,” with performances by her quartet Throw Down or Shut Up! on September 30. For more information, see Upcoming Events (below). “What do you hear?” is the third of the Musical Conversations series, a venture of the Music Theory Department in collaboration with CU on the Weekend. We aim to share our understanding of musical structure and meaning in accessible and engaging formats.

HAPPENINGS IN THE THEORY DEPARTMENT

This is a dynamic and exciting time for the Music Theory Department at CU Boulder! We are pleased to announce the hire of Mark Arnett as Instructor of Music Theory following a national search (see the profile below). We are also in the final stages of setting up a new graduate certificate—an “add-on” degree for DMA and PhD students who are interested in the field of music theory and may go on to teach theory as part of their professional portfolios.

On the scholarly front, Daphne Leong and Keith Waters have books forthcoming with Oxford University Press (Leong, Performing Knowledge; Waters, Postbop Jazz). Leong will also collaborate with Steven Bruns and recent DMA graduate Michiko Theurer for a presentation and performance in Amsterdam featuring George Crumb’s Nocturnes. Yonatan Malin has completed a chapter on Fanny Hensel’s songs and an article on the relationship between ethnography and analysis. Our MM student Clay Downham will present a paper on the music of Eric Dolphy at the GAMuT Graduate Student Conference and a meeting of the Semiotic Society of America.

New teaching initiatives include a special topics course for upper level undergraduates and Keith Waters’s collaboration with the Thompson Jazz Studies Program to create specialized courses in jazz theory. Finally, we continue to serve in leadership positions in the field: Leong is Vice President of the Society for Music Theory (SMT), Malin is on the SMT Executive Board, Waters is on the editorial board for Music Theory Spectrum, and Philip Chang is the new Reviews Editor for the Journal of Music Theory Pedagogy. 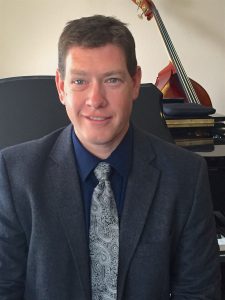 Mark Arnett is a jazz pianist, composer and educator originally from Fairbanks, Alaska. He studied piano, composition and theory at Linfield College (BA, Theory & Composition), the University of Portland (MA, Piano & Composition), and the University of Colorado (DMA, Composition). His dissertation examined the string quartets of Latvian composer Peteris Vasks—milestones in the evolution of Vasks’s compositional style and windows into his reaction against the Soviet occupation of Latvia.

He has received numerous commissions for choral works including Alleluia, Light, and Dona Nobis Pacem and wind ensemble works including Southwinds, Three Portraits of a Supervillain, Hoy’s Crossing and The Grand Parapet. He has also composed for documentary and art films as well as animated short films. His compositions have been widely performed by university, high school and community ensembles.

Arnett has performed with notable musicians such as Kim Nazarian, Tom Patitucci, Dave Kaptein, David Friesen, Dennis Plies, Clark Bondy, Gavin Bondy, Ron Steen, Gary Hobbs, Tom Wakeling, and Rebecca Kilgore. He was the leader and arranger for the Arnett, Rippey & Broome Trio, the Mark Arnett Trio, and the Arnett-Bondy Duo. He has composed and arranged for small jazz ensembles, big bands, and vocal jazz ensembles and has served as a clinician for jazz festivals and for university and high school jazz ensembles.

He enjoys exploring the Rockies with his family, running, playing racquetball, and building guitar effects pedals.

UPCOMING EVENTS – free and open to the public

What do you hear? Listening to modernist music
Daphne Leong

Composers such as Schoenberg, Reich, and Penderecki wrote music called serialist, minimalist, and textural. What do you hear in this music, and how can that be informed by how the music works? In all of the arts, modernism challenged aesthetic precepts and narrative conventions. In music, it presented radically new systems of pitch organization, ways of shaping musical time, and types of musical sounds. In this interactive presentation, Leong will offer a crash course in modernist music, which she describes as beautiful, fascinating, challenging, dramatic, invigorating, and fun. She will discuss some of the notable features of pieces by Bartók, Schoenberg, Webern, Messiaen, Stockhausen, Carter, Babbitt, Reich, Penderecki, Ligeti, and others—always focusing on “what we hear and what we might hear that we don’t yet.” The talk will end with a live performance of two pieces: Throw Down or Shut Up! by current composer Vineet Shende and a mystery piece that the audience will be invited to discover.

This presentation is part of the series “Musical Conversations,” presented by the Music Theory Department of the CU Boulder College of Music in collaboration with CU on the Weekend.

Daphne Leong has been a professor of music theory at CU Boulder since 2000. She is interested in examining rhythm, relations between analysis and performance, and the music of 20th– and 21st-century composers. Her forthcoming book, Performing Knowledge: 20th-century Music in Analysis and Performance (Oxford University Press), features chapters collaboratively authored with well-known performing artists and composers.

Leong is also an active pianist and chamber musician, performing in recent years in the United States, Canada, England, Romania, and Hong Kong. Her repertoire ranges from Bach to premieres of current music. She is a founding member of the quartet Throw Down or Shut Up! which presents new music in traditional and non-traditional formats (concert halls, jazz clubs, interactive concerts for children).

Leong received the 2013 Excellence in Teaching Award of the University of Colorado Boulder Faculty Assembly. She serves currently as the elected Vice President of the national Society for Music Theory.