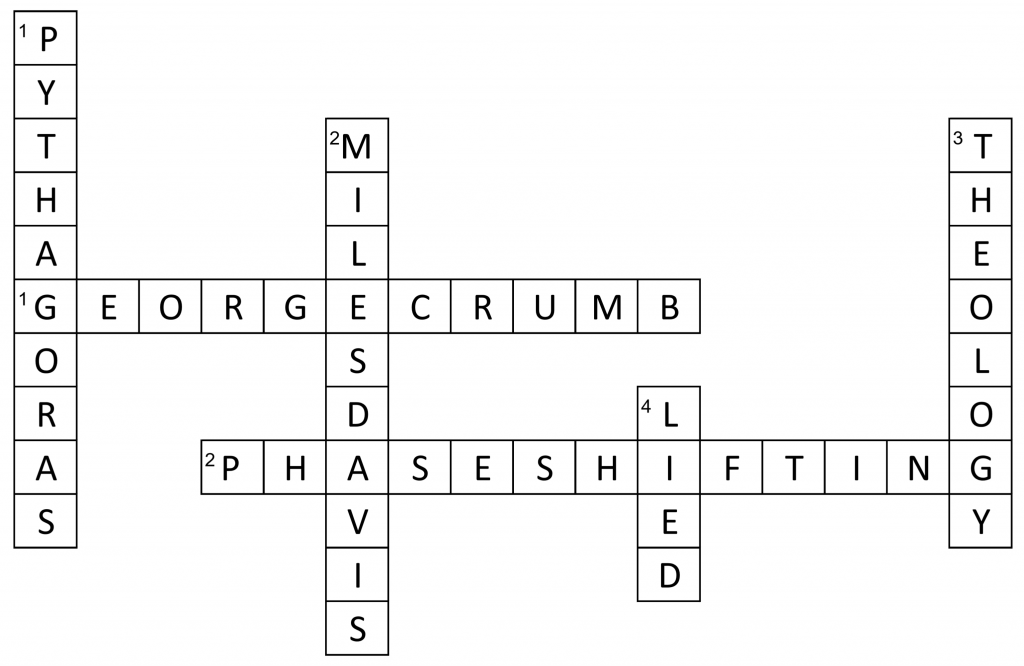 1. George Crumb (b. 1929). George Crumb and the Alchemy of Sound; Essays on His Music, ed. Bruns and Ben-Amots, was published in honor of Crumb’s 75th birthday. The score excerpt is the opening page from Crumb’s 1979 song cycle, Apparition, a setting of poetic fragments from Walt Whitman’s great elegy on the death of Abraham Lincoln, When Lilacs Last in the Dooryard Bloom’d. The pianist reads from the two arched staves, while the singer reads traditional horizontal staves on the facing page (not shown). Crumb’s unconventional notation is meant to reflect the welling, pulsating motion of ocean waves and the starry, arched dome of the heavens in Whitman’s poem: “The night in silence under many a star,/ The ocean shore and the husky whispering wave whose voice I know.” The recording features the song cycle’s dedicatees, the late mezzo-soprano Jan DeGaetani and pianist Gilbert Kaplan.

2. Phase-shifting. For more on this, see the animation here.

1. Pythagoras (6th c. BC). He is credited with discovering the frequency ratios of basic musical intervals (the octave has a ratio of 2:1; the perfect 5th of 3:2: the perfect 4th of 4:3). According to his “harmony of the spheres,” the planets in their orbits each emit a note, together forming a scale or “harmonia.”

2. Miles Davis. Davis was one of the preeminent jazz musicians of the 20th century. As a central figure, he drove many of the major jazz trends after 1950: bebop, cool jazz, modal jazz, postbop, and jazz-rock fusion. Listen to the Miles Davis Quintet track “Dolores” (1966) below. Waters’ book is entitled The Studio Recordings of the Miles Davis Quintet 1965-68; another book, Postbop Jazz in the 1960s: The Compositions of Wayne Shorter, Herbie Hancock, and Chick Corea (Oxford), is in press.

3. Theology. Lippius used the idea of the trinity to describe the 3-note triad, or “trias harmonica.”

4. Lied. Lied, or Lieder (plural), refers to German art song. Franz Schubert wrote more than 600 Lieder; “Gretchen am Spinnrade” (“Gretchen at the Spinning Wheel”) is a famous example (listen below). Other well-known Lied composers are Fanny Hensel, Robert Schumann, Johannes Brahms, and Hugo Wolf. The full title of Malin’s book is Songs in Motion: Rhythm and Meter in the German Lied.
(The performers on the recording are Elly Ameling and Jörg Demus.)